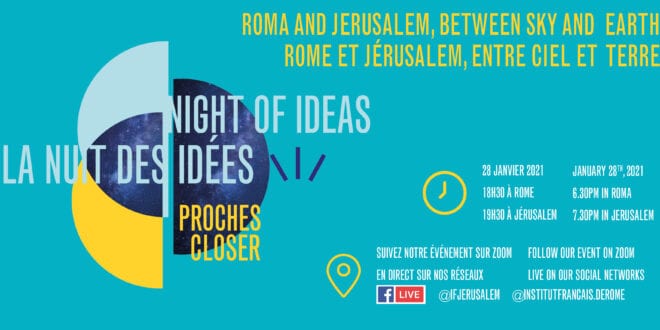 Night of Ideas « Roma and Jerusalem, between heaven and earth »

The French Institute of Jerusalem and the French Institute Saint Louis Centre are pleased to invite you to the Night of Ideas 2021, an annual event dedicated to the free flow of ideas and knowledge. We will have the pleasure to welcome you live through our social networks to discuss the theme “Rome and Jerusalem, between heaven and earth”.

The debates will be available in English, French or Italian, choose your language !

Celebrate the flow of ideas between countries and cultures, disciplines and generations: Every year, the Night of Ideas is an invitation to discover the actuality of knowledge, to listen to those who advance ideas in the fields, to exchange on the major issues of our time. Because thought crosses borders, all events are welcome (conference, theatre, performance, screenings, concerts, etc.) and the most prestigious and unexpected places are invited to join the celebration, by proposing their original interpretation of the proposed theme. Over time zones, the echoes of the Night of Idea are reflected on social networks, making the Night of Idea a global event.

The next edition of the Night of Ideas will take place on 28 January 2021, the last Thursday of January, simultaneously in France and around the world, around the theme «Closer».

CLOSER “Roma and Jerusalem, between heaven and earth”

7.30pm (Roma time) / 8.30pm (Jerusalem time)
1st conversation: the meeting
Let’s talk with the stakeholders on the field: how the interculutral meeting goes through the religious fact

Symbol cities. Crossroads cities. Cities between heaven and earth. Holy cities crossed since their foundation by very human stories, weightiness and intrigues. Heritage cities whose stones, buildings, palaces and basilicas bear witness to the centuries-old hope of pilgrims of all faiths. Cities of promised and still fragile reconciliation. Cities of conversation and controversy… Roma and Jerusalem.

These two cities with universal vocation continue to think the challenges of our time: ultimately holiness does not consist in magically solving everything but in confronting, in all its difficulties, the limits of our common humanity. This Night of Ideas will try to reflect on the great current questions, the fear of the other, the difficulties of dialogue, the transmission, the facilities or the traps of the digital in the very specific contexts of Roma and Jerusalem.

Whether in the Vatican or in Jerusalem, long-standing new experiences are particularly relevant in the current context, whether in the field of education, intercultural and interreligious dialogue, conflicts mediation, the preservation of heritage or the digital revolution. These experiences are in concrete danger of confronting the heavy questions raised by the current pandemic: how can we stay close while everything encourages distance and hence mistrust? How to maintain the dialogue between cultures and religions? How to educate for justice and peace in schools where religious and cultural differences are exacerbated by conflict? How can we reinvent the transmission of traditions, of the cult, of the liturgical in the digital age?

Living together in a confused world

For some time now, we have been witnessing the great disorder of a world caught in the whirlwind of the opposing winds of globalization: freedom and security, competition and cooperation, innovation and conservation, exclusion and integration. The global crisis in which humanity is now immersed reminds us that it is the anticipated awareness of a common destiny that can unite the world community in formation.

Faced with this observation, Mireille Delmas Marty, renowned jurist and professor emeritus at the Collège de France, releases an unusual compass where meet regulating principles (fraternity, hospitality, equal dignity, solidarity, responsibility) and confronts the story of the collapse that of globality, a community of destiny united and united in its plurality. Jérôme Clément, one of the witnesses and privileged actors of the construction of cultural policy in France, testifies to the essential role of culture in our models of society.

Video: «Rome, the Jerusalem of the West hemisphere»

Let’s talk with the stakeholders on the field: how the intercultural meeting goes through the religious fact

The pandemic that prevents us from seeing each other physically and that makes our contacts scarce is ultimately only a circumstance in a background movement. It helps us to realize that the encounter is not an obvious one and that the gaps are always widening between opinions or beliefs that are more and more distinct and radical. How do Rome and Jerusalem, cities that want to be universal, conceive the encounter between cultures, beliefs and traditions? It is in these places that the need for dialogue takes on its full meaning. The actors on the ground are at the heart of the experimentation of the meeting, especially in the educational sector where the maintenance of dialogue between beliefs and religions is a necessary challenge but where it is possible when religious neutrality is posed in principle. If, each in his religion, the students receive religious instruction on the spot, each according to his faith, the meeting is born in several ways, on the basis of a common project of education that is addressed to all.

Charles Personnaz, director of the National Heritage Institute (Paris), author of the report “Strengthening France’s action in the protection of the Middle East heritage and supporting the educational network of Christian communities in the region”;

Benoit Bonnet, Director of the International Institute of Saint Dominic in Roma.

Tradition in the test of modernity: dialogue through initiatives of intellectual openness of religions

Tradition is, in a way, the mysterious link between heaven and earth to which the believer adheres in order to share its strength and fragility in a community. It is therefore necessary to pass on from generation to generation to keep the flame of origin alive. It is commonly the role of rituals, celebrations, gatherings, liturgy, etc. Can we transmit, invent always anew without taking the risk of betraying? The issue of digital, among others, in the present time is of this order. This question, which is lively, legitimate and necessary, must not be fearful but must provoke a real renewal of tradition which is tradition only if it risks the lively origin of religion at the challenge of the new times.

Jean-Jacques Pérennes, Director of the French Biblical and Archaeological School;

Pauline Bebe, Rabbi of the Liberal Jewish Community of France;

Laurent Basanese, Director of the Centre for Interreligious Studies of the Pontifical Gregorian University.